In 2017 I founded Professional Speakers Frankfurt, an Advanced Toastmasters Club, where I’m currently a member. I became the Club’s first President (2017-18) and I serve as Vice President Public Relations for 2019-20.

I served as Area Director of Area F3, District 95 for the Toastmasters year 2018/19. My task was to help the clubs in my area achieve their goals and deliver an excellent experience for their members. To do this, I frequently interacted with the Club Executive Committees. I also organized club officer trainings and the yearly Area Speech Contest.

I’ve earned the Distinguished Toastmaster (DTM) award, the highest level of educational achievement in Toastmasters. In the process, I’ve given dozens of prepared and improvised speeches at Toastmasters and fulfilled a set of leadership requirements. 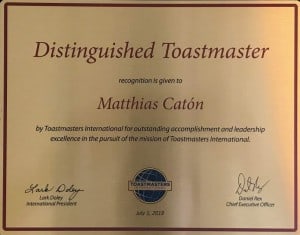 My year as Toastmasters Area Director

How to create a Toastmasters Club